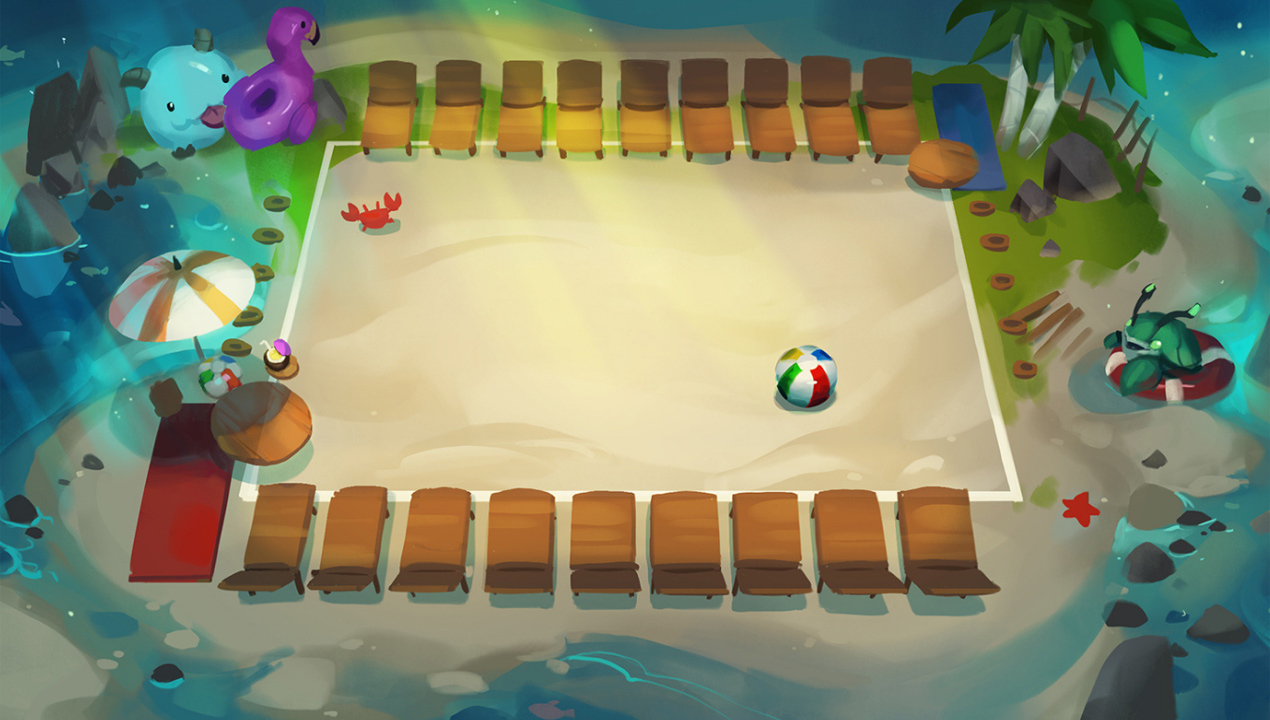 Behind the scenes of Chaos Pengu's chaotic lair and Choncc's island getaway.

Whether you’re combatting the Black Mist in the depths of the Count Spatula arena, or avoiding it altogether while lounging at Splash Party Arena, we’re here to dive or spelunk into the details of these boards.

Travel through a portal or two and you’ll eventually find yourself in Chaos Pengu’s lair! This dark yet homey space is the kinda place you’d take your hostages--I mean, friends--to bear witness to the glory of your minion metal band. That’s right, it’s the Count Spatula arena! But despite all the cool decor it boasts now, this place actually started from the early concept pulled from Concept Artist, Igor Artyomenko’s virtual notebook below. 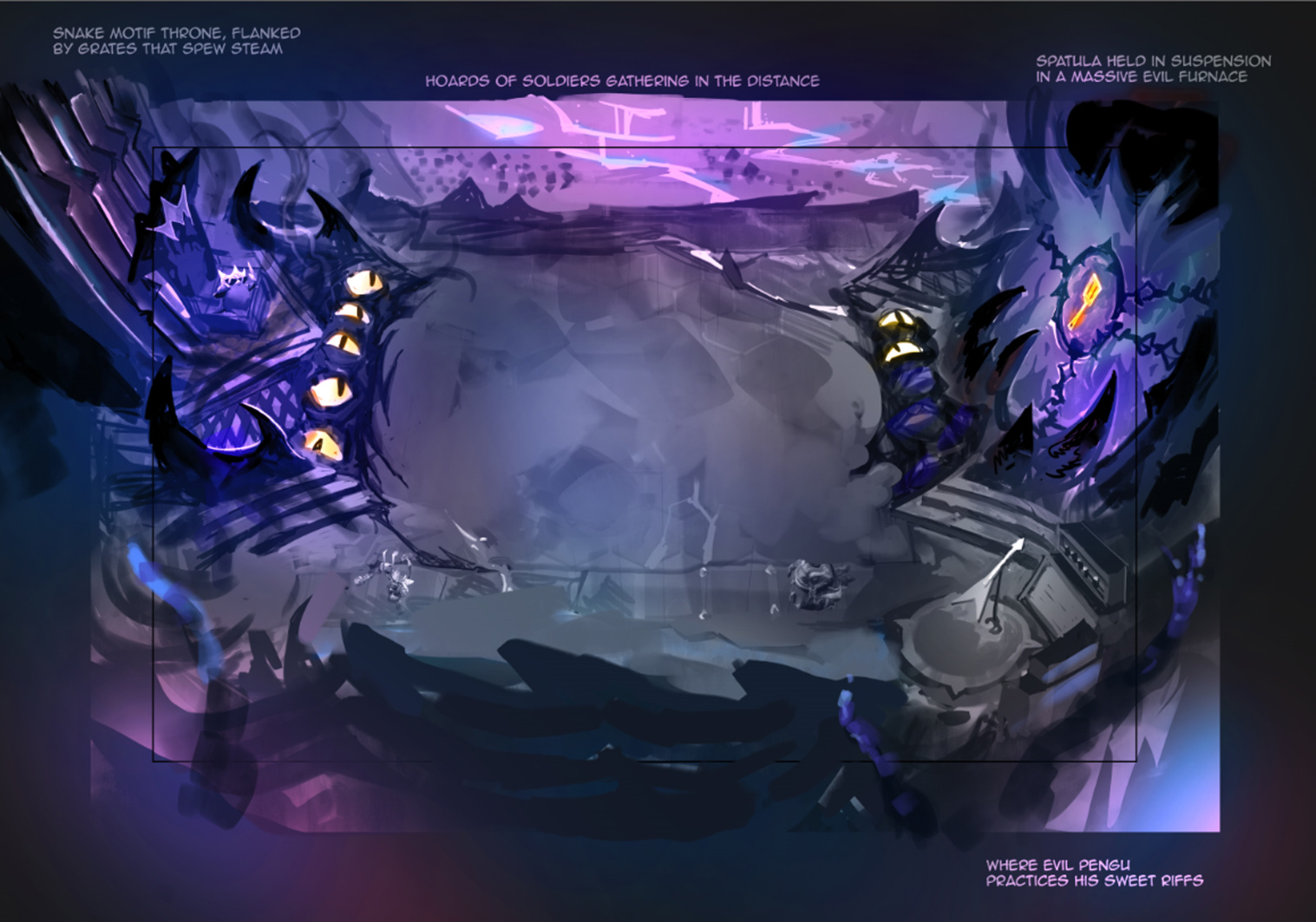 But with time, and a little home improvement work, the Count Spatula arena now features household must-haves such as a rad chopper bike and a marvelous self portrait of our favorite baddie, Chaos Pengu. Details like these can turn an arena from barren cave to rant ‘n’ rave--but they also give insight into the personality of Chaos Pengu themself! Check two later concepts for the arena here: 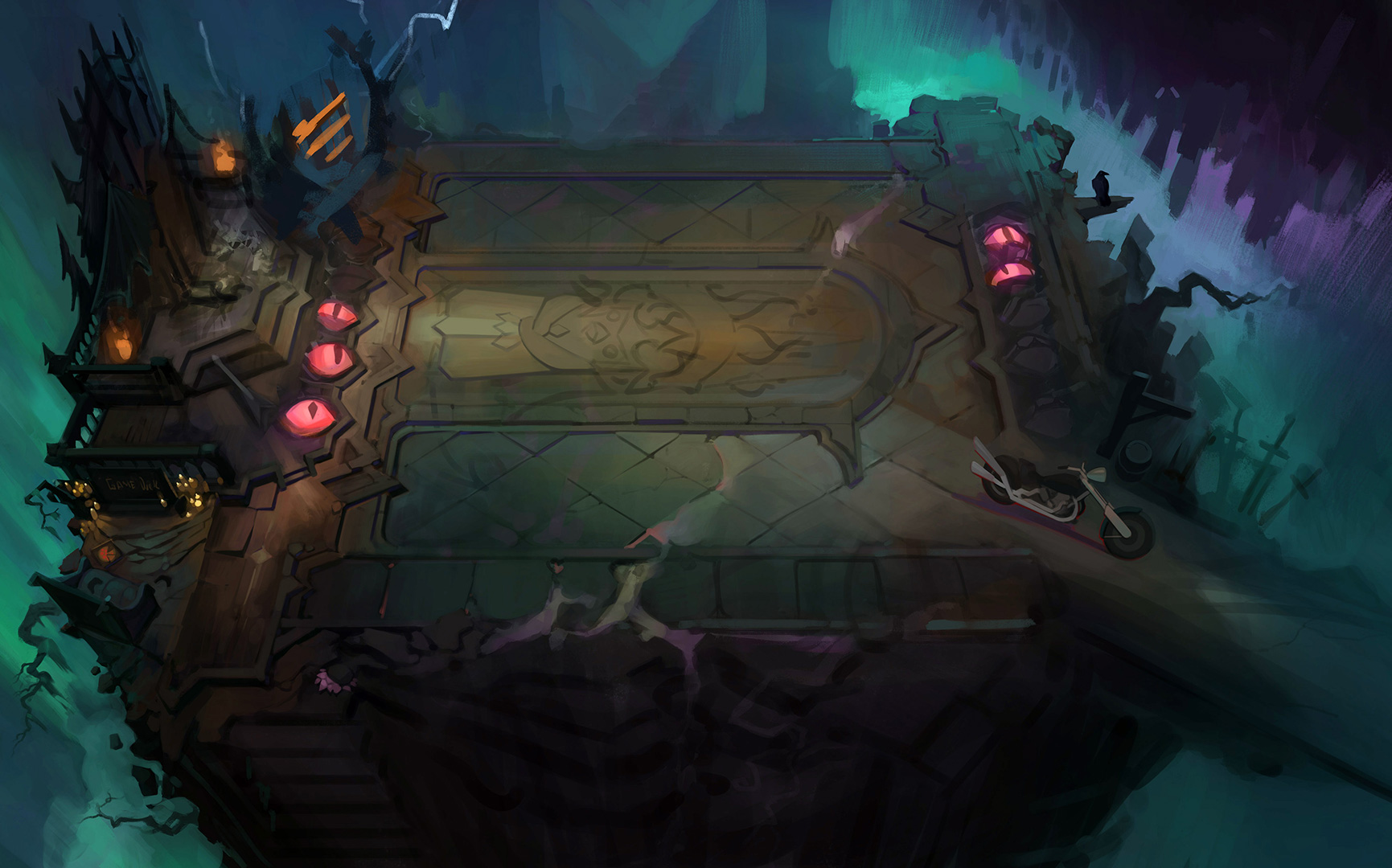 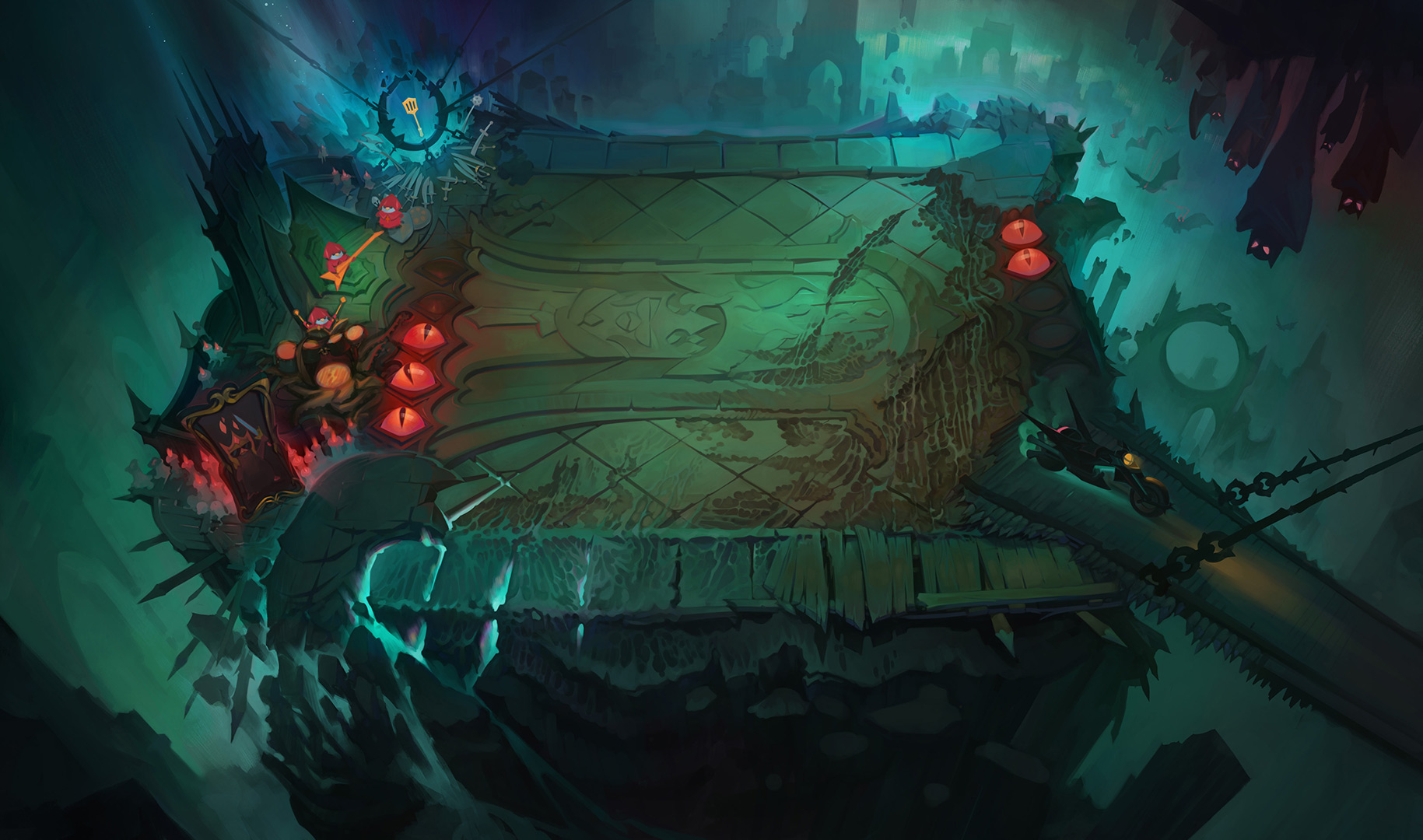 Now, while the Count Spatula arena was crafted with Chaos Pengu front of mind, the concept for our other interactive arena, Splash Party, came from the desire to create a place where players could soak up the sun, kick back, and Choncc out. Concept Artist Gino Whitehall crafted the Splash Party arena concept to feel like a beach volleyball game, with sandy courts and teams starting in opposition. But the design for this arena took a couple turns before arriving at the beachside getaway it is today! Artists started with pool-related concepts. But anyone who’s ever looked at a pool can concretely say they’re not very inspiring. From there, the artists explored the idea of a water park with a lazy river (explorations below), which influenced the final version of the arena, the beach-side Splash Party that we have now. 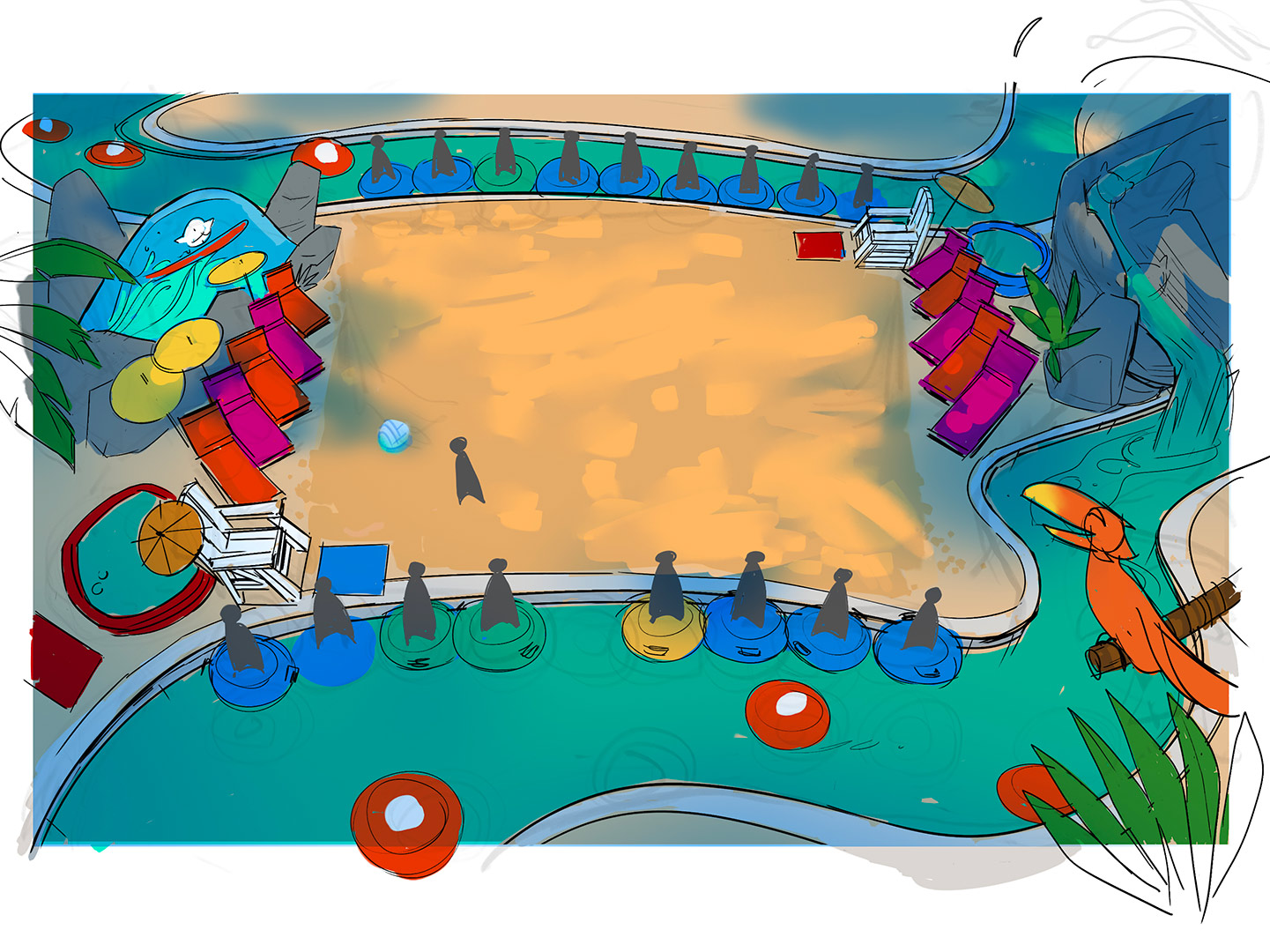 Concept Art is also responsible for adding any interactable elements to an arena. For Splash Party, that includes the water slides, Scuttle Shack, and more--but I’ll get more into these interactables later. With the concept and locale locked, the next step for these arenas is Environment Art.

Environment Art means creating a place to sell seaside snacks, or giving a secret lair teeth--er, I mean stalactites. But most of all, it’s where Jeremy Page, our Manager of 3D Environment Art, adds to a concept until it becomes a reality. But crafting that reality involves a number of phases, ultimately finishing with a beauty pass. 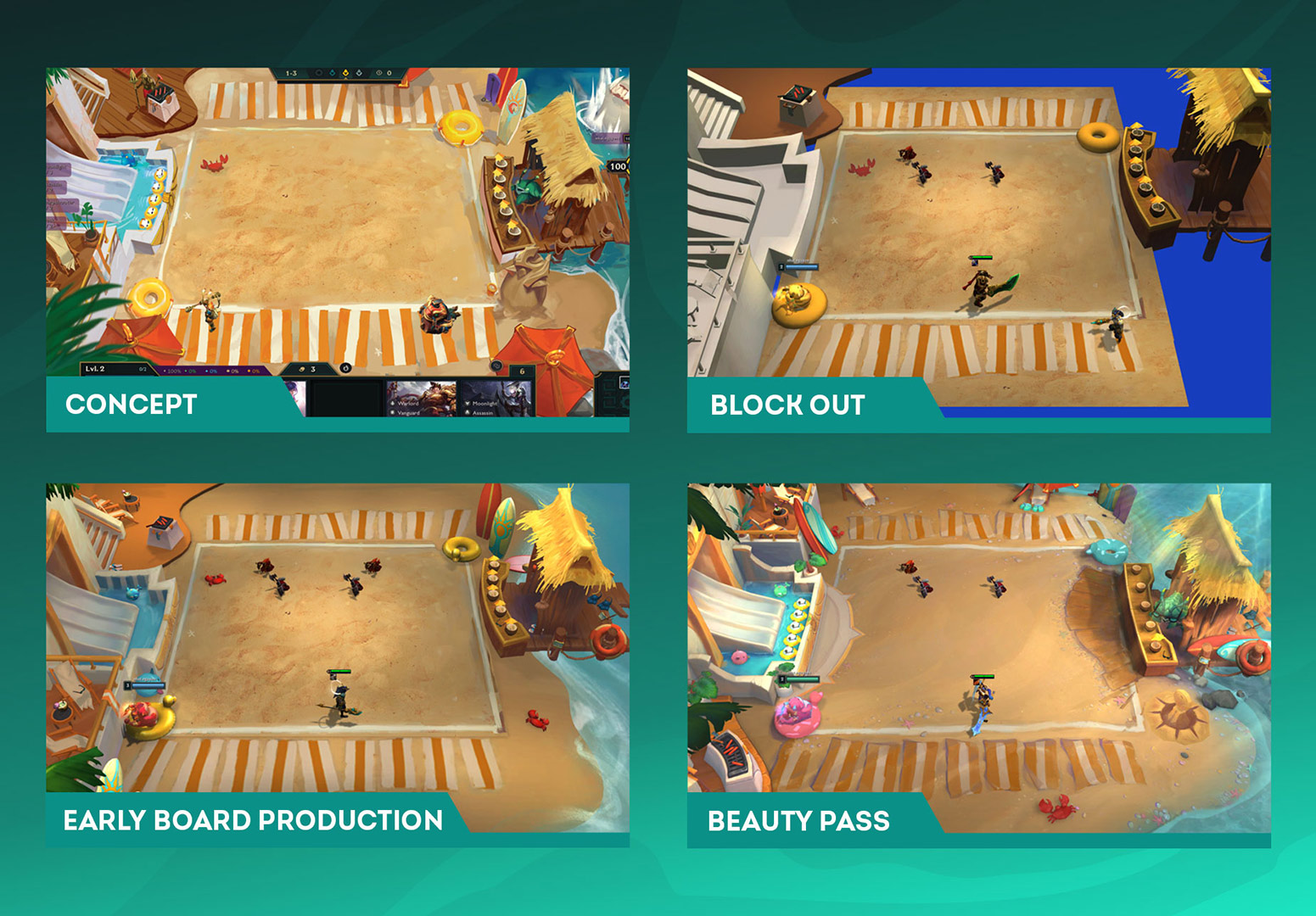 The beauty pass takes more time than any other phase of the process--not only because it requires constant feedback and reiterations, but also because the team has some pretty high standards for beauty. But these standards have paid off!

If you thought all that sounded cool, wait til you hear this.

Those are the audio tracks for this set’s new Splash Party and Count Spatula arenas, courtesy of Alison Ho, the TFT Sound Design Lead.

Sound design is the art of creating layers of sounds that blend with the aesthetics of an environment. For Splash Party arena, ukulele strums, the clamor of beachgoers, and sounds of walking over the boards at the Scuttle Shack not only match the visuals of the arena, but make it feel more alive and real. And there's a good reason for that! While some of these sounds can be found using a digital library, others (like the mellow waves and sounds of roller skating) came from audio captured by Alison and other sound designers.

Using real-world sounds like these creates a more believable and immersive Splash Party experience. The ambient sounds of skating come from Alison’s own recording in Uptown, Chicago. And the soothing waves come from a recording Isaac Kikawa and his pup, Dixie, captured in Switzer Falls out in Pasadena, California, seen below: 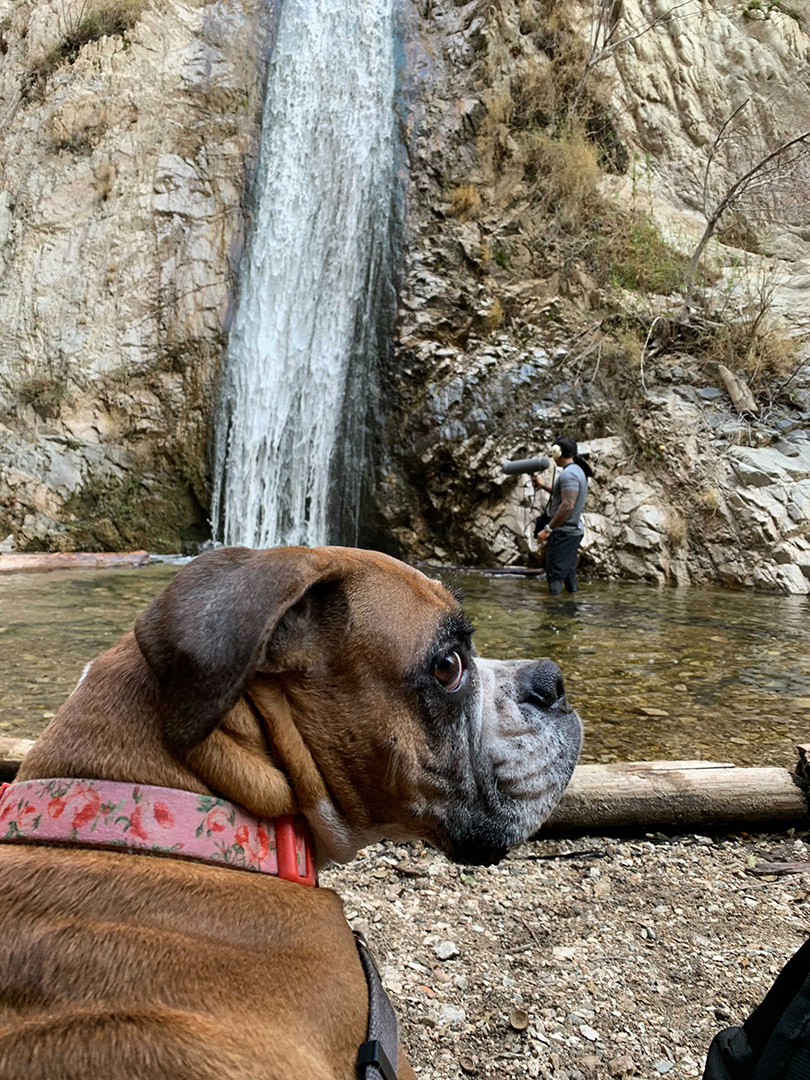 Other sounds, like those for the Count Spatula arena, came from folks like League of Legends Audio Director, Matteo Stronati, rocking out on the drums or Brendon Williams, Composer, riffing on the guitar. Most sound design is a matching effort with VFX. But for Count Spatula’s minion band, it’s the other way around. Both victory and defeat trigger different auditory effects, where minions (who have feelings too) rock out in celebration or frustration. Speaking of VFX…

Making VFX for boards is sort of like creating a conversation with the player—moments where the game reacts to your choices, wins, and losses. When your loss streak makes your own motorbike abandon you in shame, it’s like the game is feeling your emotions right alongside you. But not all VFX conversations are about defeat. Some of VFX artist Riot iZac’s favorites from this set are the Splash Party arena’s clickable water slides, where you can uncover what happened to Choncc’s snorkel gear.

The spammable interactives that exist on the Count Spatula and Splash Party arenas are completely new to TFT. We’ve had win and loss streak SFX and even interactables before. But for the first time ever, TFT has dynamic clickable interactives such as the runes in the Count Spatula arena or the water slide in Splash Party. They’re interactable elements that change with each click, but can also be influenced by your game state. As a player you can rapidly click to create your desired sand castle, only to have it destroyed by a wave upon losing. Unlucky.

As you can probably tell, there’s a lot to explore in Reckoning’s new arenas—more than I could get to here. So get to exploring, and let me know if you figure out how to get that motorbike to come back. Hmm...

The TFT: Reckoning arenas bring many firsts to TFT. From the many clickable interactions to the home-captured sounds of water and metal, there’s lots to explore in these arenas. So be sure to discover more features and easter eggs by picking up the Count Spatula and Splash Party arenas while they’re still available!